de Havilland Heraldry » What is Our Family Coat of Arms?

What is Our Family Coat-of-Arms?

The short answer is: THERE IS NONE!

A quick Google search of the words "Haviland Coat of Arms" or "de Havilland Coat of Arms" will probably render merchants all selling the same image (with a few variations in the art work). It will consist of a silver shield with three black triple-towered castles, and a crest consisting of a helm, a crown on top of the helm, and a triple-towered castle on top of the crown.

Don't be fooled. That image does not belong to the Haviland or de Havilland surname, nor to all the descendants of a de Havilland ancestor, even if they prove that descent. The reason is because English Coats of Arms such as this bearing were granted to, or inherited by, an individual, and can only be passed down from eldest son to eldest son in that exact form.

This achievement was owned by a de Havilland man from one branch of the family and passed down through the eldest males of his line. (We are not yet sure to whom this particular bearing was granted, or who inherited it, but you can find some similar Arms in our de Havilland Bearings article.) The likelihood that you have the right to bear these arms, according to English custom, is extraordinarily small. (In fact, you'd probably know it if you were.)

In English and Scottish Heraldry only the eldest son has a right to the original arms of his father, but his younger brothers have a right to a slightly changed (or "differenced") version of the arms, and those can be be passed down through their male lines as well.

Therefore, there are many variations of this Coat of Arms, owned by de Havilland men throughout the years. The granting of these arms was regulated, and in England and Scotland it still is.

Nevertheless, this image is mass produced and sold by merchants generically under the false pretense that it belongs to "the Haviland family." This lie has led to a wide misconception amongst Americans that they can simply buy "the" Coat of Arms that represents their surname and hang it proudly on their wall as if it's a legitimate bearing.

There was no such thing as a "surname" Coat of Arms in traditional English Heraldry. Therefore, buying a Coat of Arms this way pays no respect to the rules of the College. The merchants who perpetuate these images did not likely research your branch of the family and prove if you actually have the Heraldic right to bear that Coat of Arms on your wall, or on your coffee mug, or on a flag or bumper sticker or anywhere else. They are just selling art and misleading you as to what it really is.

If you just want the work of art, nobody will trouble you about it legally. Using it as art is popular. Even in England this image has been used for commercial embellishment, such as on the signpost of the De Havilland Arms pub in Hampshire, England: 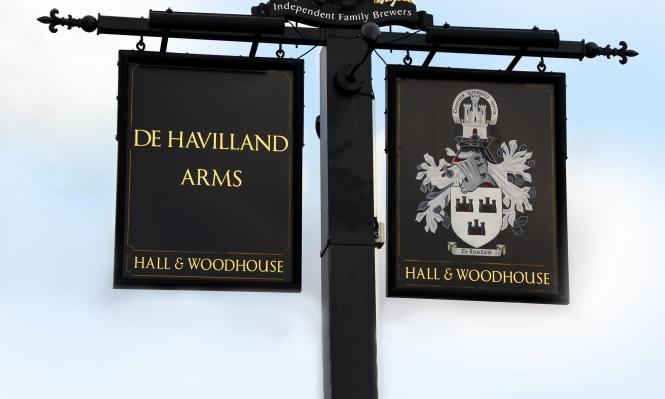 Some bearings are officially granted to companies and countries, but in medieval England, from which the de Havilland family hails, the Coat of Arms belonged only to a man, granted to him by a ruling monarch. If anyone else bore the same Arms without entitlement it was effectively identity theft, and punishable by law. To use an American analogy, imagine if someone took your Social Security Number and posted their name on it and presented it to the authorities as theirs.

Now all this might sound like bad news, but if you want a real Coat of Arms there is still hope. It is possible to petition the College of Arms for one. If you are a United States citizen it is possible to be granted an honorary Coat of Arms by the College. To do this, you have to prove your great grandparent's descent from a subject of the British crown. It doesn't even need to be from your paternal genealogy (male to male to male, etc). If you provide the proper documentary evidence (primary sources such as census records, not secondary sources such as genealogy books) that proves you descend from a British subject on some branch, the Heralds will work with you on designing a Coat of Arms for you and registering it.

You can then recognize Heraldic tradition and pass it down to your eldest son, and difference it (using the rules of cadency) for your other sons.

This effort is a lot of hard work, and it can be very costly.

There is a cheaper route: which is to just create a fictional Coat of Arms. You can hire a Heraldic artist to paint it for you, or you can even assemble one using Photoshop with elements you can find online. Just remember that the resulting Coat of Arms wouldn't be a "real" one - recognized by the College of Arms and entered into official record. It may break Heraldic rules, even in how the art is drawn. You'd be simply creating a logo that represents you or your immediate family, that is styled like a Coat of Arms. But if you go this route, be honest with people about what it is.

But, in the U.S., if you are a male and can prove descent from someone in America who was a subject of the British Crown who lived before 1783 (the year Great Britain recognized American independence), and you can submit to them a curriculum vitae that establishes you as a professional, and you can pay the costly fees for designing personal arms and crest, you can have your own Coat of Arms granted and published by the College of Arms in London.

To explore this opportunity, visit the College of Arms web site and contact the officer in waiting for details.

This bearing is sold by merchants generically as a "Haviland" and "de Havilland" Coat-of-Arms, but that is not true. This bearing belonged to a single person and was passed down in a single line from eldest son to eldest son. It does NOT belong to the surname.