The Origins of the Haviland - de Havilland Family

"According to M. De Cerville, the distinguished Norman antiquarian, the Haviland family derived its surname from an important Neustrian fortress, so called, situated on the river Saire, three flights of an arrow above Saire Point, that is Barfleur in Normandy, at a very remote period. The earliest mention of the castle of Haviland is to be found in the Roman De Rou, a chronicle by Robert Wace, of the Isle of Jersey, who wrote in 1150." (2)

"Wace's Roman de Rou relates the origins of Normandy from the time of Rollo (Rou) to the battle of Tinchebray. It was commissioned by Henry II as a way of both celebrating the Norman past and justifying the right of Norman rulers to the throne of England: the accounts it gives of the early life of William the Conqueror and of the battle of Hastings, which occupy a substantial portion of the work, make it a valuable historical document as well as an important work of literature." (3)

Neustria was the Western division of the Frankish kingdom, in the country we now call Normandy. In fact it came to be named Normandy after the very Norse conquerors who attacked and destroyed the fortress Abilant in ca 888. (The whole territory was soon thereafter ceded to Rollo, of the Normans, by King Charles III "The Simple" in 911, but became English territory after William the Conqueror in 1066. It was then annexed by Philip II in 1204, recovered again by Henry V of England in the early 15th century, and finally incorporated into France after 1450.) The river Saire is in the region we now call Cotentin, which is the Northwestern tip of Normandy that juts out into the English Channel. Thus writes John V.S. de Havilland:

"Although the great mass of the population of Neustria in the time of the Romans was Celtic, yet at a very early period of their domination the Saxons had made settlements at different points on the coasts, which had hence received the name of the Littus Saxonicum. This will account for so many places in Lower Normandy bearing names of pure Teutonic etymology, that sure evidence of the early and permanent occupation by a people."On this Saxon coast, to the north-west of the Bayeux, lies the fertile valley of the Saire, in a country which excited the admiration of Master Wace, the Jersey chronicler, who, writing his Roman de Rou in the year 1150, describes it as full of beautiful woods and rivers; and relates that, about A.D. 888, the Norse Vikings, Hastings and Bier, attacked the strong castle of Haverland on the Saire but three flights of an arrow above its mouth, ravaged the surrounding country, and burnt the monasteries. This was before the treaty of Claire-sur-Epte: the duchy, however, ceded by Charles to Rollo, did not include this portion of modern Normandy, which was only acquired by a victory over the Armorican-Bretons in 931, when the county of Coutances was given to the victor Riulph, ancestor of the Vicomtes de St. Sauveur; and at the same time large possessions here were granted to a kinsman of the Duke, Bertrand the progenitor of the Barons of Briquebec, who is claimed by Mr. Wiffen as the stem of the Ducal house of Bedford. Attached to each of these important strongholds of the Province were certain fiefs intended for their maintenance, and held by their Châtelaines. Such fiefs were generally situated within the honour to which the Castle was attached, but often at some distance from its site, and were designated by the name of the Fortress. At a very early period, before the conquest of England, the Châtellenie of Haverland Castle was held by a Norman knight, who, in right of his office, possessed the fiefs attached to his charge situated in different parts of the Coutentin, which fees continued in the possession of his descendants long after the Castle had ceased to exist. The Barony being thus transmitted from generation to generation, the family derived not only its surname but its arms from this source. "As such offices were generally conferred on junior members of great houses, it is not improbable that the first Châtelain of Haverland was a scion of the powerful Viscomtes de St. Sauveur who, as before mentioned, were then, and long after, the governors of the County of Coutances. Of this honour of St. Sauveur the family of Havilland held fiefs near Barneville, at Golleville, and St. Colomba, all in the neighborhood of Valognes, down to the end of the 13th century. Now a high legal authority asserts, that 'the name of a barony was exclusively used by its possessors and their descendants; and the possession of a territorial name of a barony as surely makes out a descent from some of the ancient barons, as if every step of the genealogy could be proved.' Dignity among the Normans was territorial rather than personal. To have so much land was to be a Baron. And the Knight and Esquire holding fewer of these broad acres were less powerful, but not less noble. To this cause we owe the superior respect which to this day, in our country, is paid to the owner of the land, to that which is rendered to the possessor of any other kind of property."

Here are the words of Wace himself, in the appendix of the Roman de Rou, as translated and notated by Glyn S. Burgess:

"In Le Ham there was a wealthy abbey, well situated and well equipped. Hasting the robber destroyed it; he took away its possessions and then set fire to it. In Saint-Marcouf, on the river, there was a wealthy and affluent abbey; at that time the region surrounding it was called Nantus. Hasting and Björn destroyed it, robbed it and then set fire to it. Regouminie and Abilant and the castle of Garillant — Abilant is situated beneath a harbour; he would go straight there, the castle was very strong and the region very fertile, with fine woods and a fine river. The man who first built it and who constructed the castle was very wise and courtly; it is now called Mont Hagneiz. Hasting came there, destroyed it and set light to it." (3) [Mont Hagneiz is a hill above the valley of the Saire.] 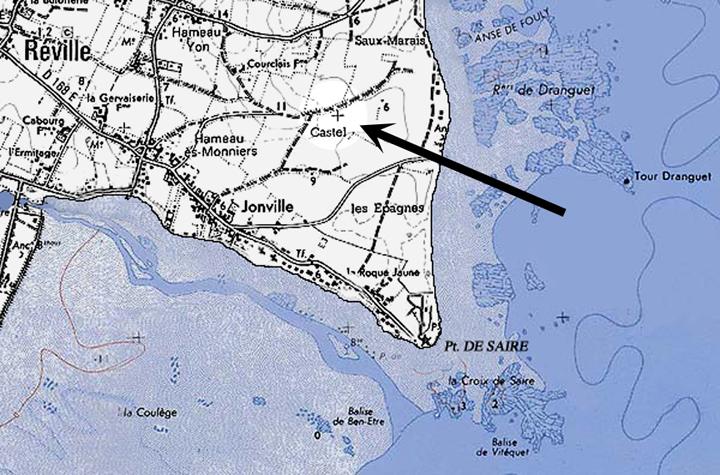 This is one possible location of the Abilant fortress near the mouth of the river Saire in present-day Normandy, in the area of the modern village of Réville. There are buried ruins at this location, marked here by the word "Castel" -- an old French word that came from the Latin castellum, which means fort. The word castel is closely related to the family name Castille whose arms are very similar to those of Haviland. The river runs out onto a tidal beach, and into a body of water which is sometimes referred to as "Le Havre de Saire." This means "The Harbour of Saire." Could there be an etymological connection between the French word Havre and the Haviland surname? There is also a city called Le Havre on the Eastern shore of the gulf. One variant spelling of our name is Haverlain... The -lain suffix could have the same meaning as the German -lein (as in fraulein): in which case Haverlain would mean "small harbor." This notion seems to fit nicely, though there is no proof of it. Still, there is a population of people in the Germanic countries bearing the name Haverland since at least the 1500's. 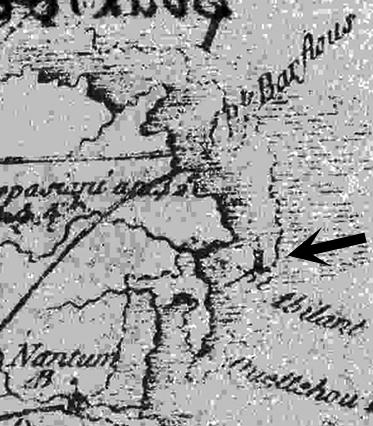 An historical map, published in 1792 by Abbe Jacques-François Lefranc, director of the seminary at Coutances, clearly showing Pt. Abilant at the mouth of the river Saire. (Map image courtesy Robert P. Haviland, from Heimdal #3 1976-1977, p. 5; original at Biblioteque National, Paris.)

But towers were used to mark strongholds on ancient maps. Towers and castles are sometimes found on coats-of-arms for cities and towns (e.g. Pittsburgh, PA) as well. While the towers in the shield of the de Havilland coat-of-arms are surmised to be an homage to the fortress that stood near the mouth of Saire on the East side of the Cotentin peninsula of modern Normandy, we cannot automatically assume that the cartographer of the 1792 map was attempting to use the de Havilland arms to mark the ancient site of the family ancestors. In fact, similar tower markers can be found elsewhere in the map. (And towers can be found amongst other arms in Cotentin families, such as Barneville and Flottemanville.)

The legend of the map reads "Tabula Topographyca Antiqua" which is Latin for "Ancient Topographical Map." Its intention is to reproduce extinct features of the topography of pre-Normandy in 1792. While scale is not correct, that is not unusual for maps of this period. But the cartographer appears to have marked two shorelines here, possibly the original shoreline on the outside vs. the modern shoreline on the inside. He has placed his emblem marking the location of Abilant on the outer shoreline, very close to the ocean. If this location is true, it would indicate that the castle was built in an area now under water. However the map may have been drafted based only on descriptions of places in the ancient past, and therefore the castle cannot be pinpointed using this map. The entire peninsula belonged to Abilant, and therefore the region appears to have been called Pt. Abilant after the fortress itself. The fortress was certainly destroyed centuries before the this map was drafted. The most likely candidate the ruins is what is marked as Castel on the modern map.